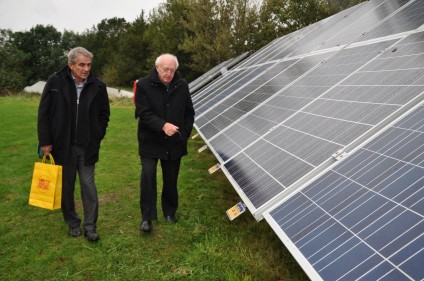 A network of 100% RE regions in Germany has 74 regions and municipalities that have already reached 100% renewable energy. One of these is Jühnde, the first bioenergy village in Germany. Through its 712kW biogas plant Jühnde produces twice the amount of electricity demanded by the local area and provides heat for 70% of the inhabitants through the co-operative, with 80% of the revenue remaining in the region. The initiative began with a public meeting in 2001 and citizen participation continues to be emphasised.

The municipality of Skellefteå, Sweden, is another good example of ambitious RE targets being set and met through community-owned power. Skellefteå Kraft is Sweden’s fifth largest electricity producer and 100% municipality-owned. The company, therefore, has a social mandate over and above its commercial pursuits. With renewables accounting for nearly 90% of its energy production it is in a good position to contribute to reaching the national targets of 50% share of renewable energy in the energy mix and 10% in transport by 2020, targets that will increase to 100% by 2050 and 2030, respectively.

This is reality not only in small towns: Denmark makes the case that 100% RE targets are set and can be met at a national level in one of the world’s wealthiest countries. As with Germany’s approach to achieving the 100% renewable energy target, the Danish experience has been one of bottom-up, participatory community power. On the Thy peninsula, where the World Future Council‘s workshop on 100% Renewable Energy in European Regions is taking place this wekeend at the Folkecenter, renewable energy – the bulk of which coming from wind – account for 100% of electricity consumption and 85% of space heating. The ‘Fossil-Free Thy’ project initiated by the Folkecenter aims to reach 100% renewable energy heating in the region in several years, and Thy is but one European example already demonstrating the feasibility of a fully renewable energy supply.

What were the main driving forces in these success stories? Jühnde demonstrates the benefits that local governance levels with a wider mandate to make decisions can bring. In Jühnde, the technology needed already existed but no one had thought to involve society in utilising it. The village found that the motivation of residents was important: as users of the technology they know best how to adapt it and suit it to their unique circumstances. Political will and the national policy framework of the German Renewable Energy Sources Act (EEG) were also key in providing a supportive financial and political environment for local governments to achieve such targets, thus facilitating co-operation between governance levels. The Swedish municipality of Skelleptea benefited from the entrepreneurial spirit of its citizens, showing the importance of engaging the local community and empowering them to be active. All of these driving forces are also observed in Denmark, where a decentralised decision-making structure of over 100 wind turbine co-operatives is paving the way to 100% renewables.

Europe is a world leader in renewable energy and is at a mature enough stage to discuss not only the acceleration of RE installations but also about how to integrate RE into the existing infrastructure and markets in order to reach a 100% RE mix. We have seen that target setting streamlines political strategies towards one goal. The discussions during today’s workshop showed that we need to look beyond national frameworks and adapt our policies in order to achieve a 100% renewable energy target.

This post was originally posted on www.power-to-the-people.net and was written by Anna Leidreiter.