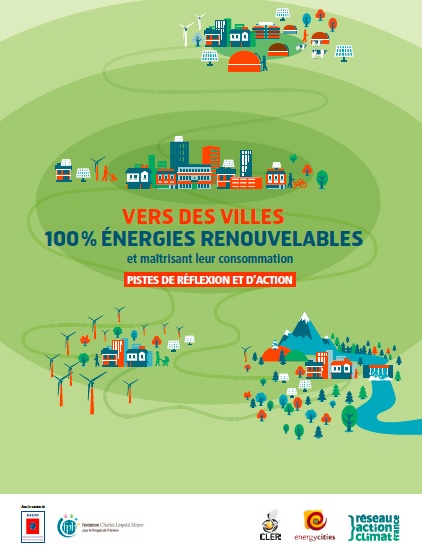 What does a 100% renewable energy target mean for a city ? Is it a possible utopia or a non-negotiable goal ? In their latest report, Energy Cities and the Global 100% RE supporter CLER and RAC describe the process, challenges and opportunities of cities committed to get powered by 100% renewable energy.

This new report, published in French, opens with the story of five European leading cities. With very different motivations, approaches and timelines, those cities work hard to develop an energy system based on energy efficiency and the highest possible share of locally-sourced renewables.

In addition, the editors have analysed and interviewed sustainability and energy managers as well as public officials of over 15 French cities and regions. The interviewees talked about the complexity of the task, the difficulty to set a target and timeline, the necessary planning frameworks and new emerging priorities.

The study identifies five main actions that really matter on the path to 100% renewable energy :

Setting a long-term objective with a clear vision of a desirable future in 2050 encourages the local community and makes it much easier to mobilise various actors. Once on target for a 100% renewable city, the challenge is the timeline. Public authorities, citizens, association and entrepreneurs should work collaboratively to test, adapt and innovate. This starts with very concrete short and mid-term measures that give credibility to the political decision. Intermediate steps should be defined in strategic documents such as regional air/energy/climate plans, sustainable energy action plans or Master Plans.

Most cities are densely populated. Even by strongly reducing their energy needs, most of them cannot produce all renewable energy necessary to cover their needs within their own boundaries. This means engaging in cooperation with the surrounding, generally rural area – not by confiscating their resources, but by seeing them as an equal partner. Therefore, new links have to be created by giving equal power to all actors and areas.

More than that : This is an opportunity for a win-win situation whereby the rural communities benefit from new financial incomes (e.g. through taxations) as well as new jobs and technical support.

Solar installations, wind turbines or geothermal networks need funding. By investing directly, local authorities can foster projects, have a share in it and help distribute revenues locally. A 100% renewable city also means, strengthening energy democracy at the local level. By opening up renewable energy projects to participative financing, local actors feel part of the strategy and become an active stakeholder in the renewable future of their city. In France, various legal business forms allow for cooperatives and shared funding, including private sector involvement.

The shift to renewables combined with energy efficiency measures will give way to new players on the energy market : communities, cooperatives, digital businesses, citizens. Indeed, it is a challenge to get those different entities work together rather than in opporisiont. Ideally, each of them will bring in different views, skills and ideas thereby nourishing the new local energy model. At the same time, local authorities’ role will evolve and can take various forms : leader and initiator of renewable projects, facilitator of emerging initiatives or partner for joint actions. Participation should be the underlying principle of the 100% renewable roadmap. The idea is to open up as of the very first steps to co-construct a new energy model, to de-compartmentalise policies and create a shared momentum.

There should be regular communication with all stakeholder groups on progress, development of concrete projects, recalling the final goal (100% RE) and its benefits. This includes demonstration projects as an effective means to communicate what is possible.

Making the necessary human resources available is one important prerequisite.

We live in an era of fast digital transformations affecting all areas of our lives. The digital revolution and the energy transition progress in parallel, sometimes crossing each other, driven by different motives.

To succeed, both the energy transition and the digital transition need a clear vision and new working methods. The smart city is more than a gigantic dashboard helping control and optimise urban processes. A smart city is what we collectively decide it to be. Therefore, city administrations should implement new working methods, more transversal within the city council teams, but also between public and private players, integrating the users.

With an EU wrangling with a 40% renewables target by 2030, a 100% goal for 2050 might seem utopic. However, committed cities all over Europe show that even if the 100% renewable path might be long, it is full of great opportunities to boost the local fabric through economic, social and ecological benefits.