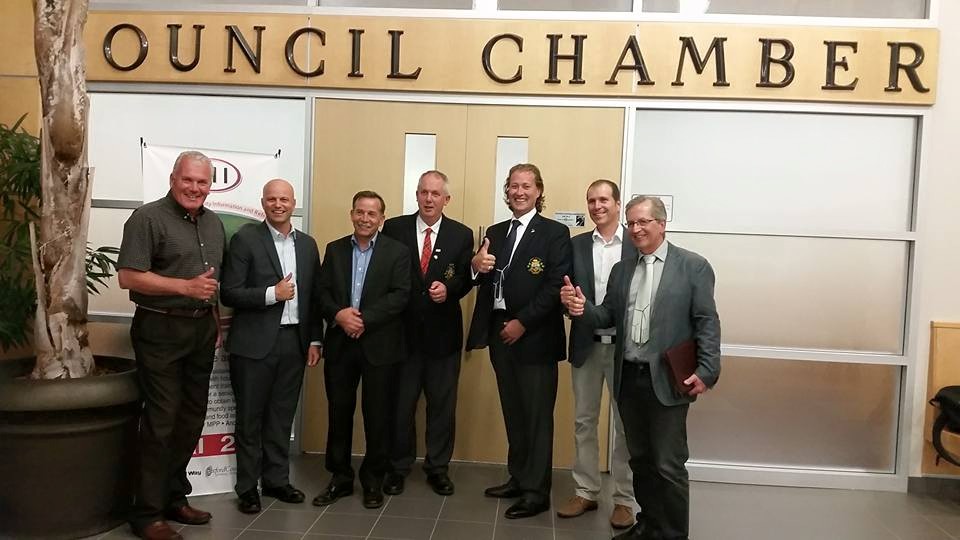 The global 100% RE movement has a new member: Oxford County is the first municipal government in Ontario to commit to a 100% renewable energy target. Local decision-makers were inspired by the various examples from across the world. After returning from the Global Learning Forum in Vancouver last months,  a motion to put Oxford County on the pathway to 100% renewable energy by 2050 was put forward by County Councillor Trevor Birtch (City of Woodstock) and passed unanimously by the Council. Trevor Birtch: “Council’s commitment to this action brings great responsibility, but also great opportunity. We are already pursuing renewable energy investment in our communities through the Smart Energy Oxford Group. We believe the commitment to 100% renewable energy is not only the right path to take for our future and our children’s future, it’s also the right approach for our local economy and our ability to continue to attract this type of investment.”

The motion means Oxford County’s municipalities will continue to pursue federal and provincial support for renewable energy projects, such as Woodstock’s White Lanes microGrid project, while at the same time establishing policies and opportunities that attract investment from the private sector, projects like Oxford Gardens’ Solar Thermal facility and the Quality Inn’s Electric Vehicle Charging Stations . The County will also pursue further study on making the energy transition with continued support from York University’s Sustainable Energy Initiative, led by Dr. Jose Etcheverry. Dr. Etcheverry, Associate Professor and Sustainable Energy Initiative (SEI) Co- Chair, York University: “The campaign for achieving 100-per-cent renewable energy is gaining international momentum because it is feasible and because it is a better option for communities: investment in renewable energy creates local jobs while promoting energy security and environmental protection. As we are seeing with cities around the world, it is possible to do well by doing good.”

With the release of the final draft of the Community Sustainability Plan to County Council on June 24, Oxford is positively positioned to commit to 100% renewable energy. The Community Sustainability Plan includes targets to reduce greenhouse gas emissions and actions to promote green construction and low-carbon transportation which, as efficiency and conservation measures, are considered first steps towards realizing a 100% renewable energy target.

With the motion to achieve a 100% renewable energy target by 2050 passed by Council, the newly formed Smart Energy Oxford Group will work to advance the Community Sustainability Plan by creating an action plan and establish measures and milestones to achieve this goal.

“Oxford County continues to show environmental leadership through action: this is a laudable achievement on the part of citizen groups, businesses, and municipal leaders and their administrations. If a jurisdiction of just over 100,000 can commit to the investment, infrastructure and political partnership it takes to adopt green energy for a more sustainable future, consider the impact of more communities following suit. Through this action we challenge other municipalities to join us and cities around the globe in committing to 100% renewable energy as an achievable and responsible target.” David Mayberry, Warden, County of Oxford

Quick facts
• The City of Woodstock and Oxford County are working with number of community members through the newly formed Smart Energy Oxford Group to bring more renewable energy initiatives to Oxford.
• Dr. Etcheverry was keynote speaker at the Sustainable Energy Expo held in Woodstock in January 2015. He also visited Oxford County in May with his team of research associates to tour energy projects across the County.

Whereas the environmental implications of continued fossil fuel use and the growing impacts of climate change are well documented and recently recognized by G7 Leaders;

And whereas significant reduction in fossil fuel dependency represents, as it does for much of the world, an enormous challenge to Oxford;

And whereas Oxford has begun to address the challenge of energy sustainability through critical first steps that include energy management and conservation strategies;

And whereas Oxford has a history of environmental courage and leadership;

And whereas Oxford is poised to adopt by the Fall of 2015 its first Community Sustainability Plan which includes, among other goals, significant advancement in the role of renewable energy in Oxford with similarly significant reductions in fossil fuel reliance;

And whereas leading municipalities around the world are considering or have committed to achieving 100% Renewable Energy by 2050;

And whereas the continued advancements of renewable energy and energy storage technologies demonstrate strong potential for achieving 100% Renewable Energy by 2050;

And whereas Oxford residents and businesses already demonstrate significant leadership in the advancement of renewable energy technologies and their applications;

About Oxford County
Located in the heart of southwestern Ontario, Oxford County has a population of approximately 109,000 people across eight municipalities that are “growing stronger together” through a partnership-oriented, two-tier municipal government incorporated as the County of Oxford. One of Ontario’s richest areas for farmland, Oxford County also boasts a rapidly expanding commercial and industrial sector that is bolstered by its choice location at the crossing of Highways 401 and 403. The County is home to a thriving local arts, culture and culinary community, as well as conservation parks, natural areas and more than 100 kilometres of scenic trails. The Oxford County Administration Building is located in Woodstock. Visit www.oxfordcounty.ca or follow our social media sites at www.oxfordcounty.ca/social.