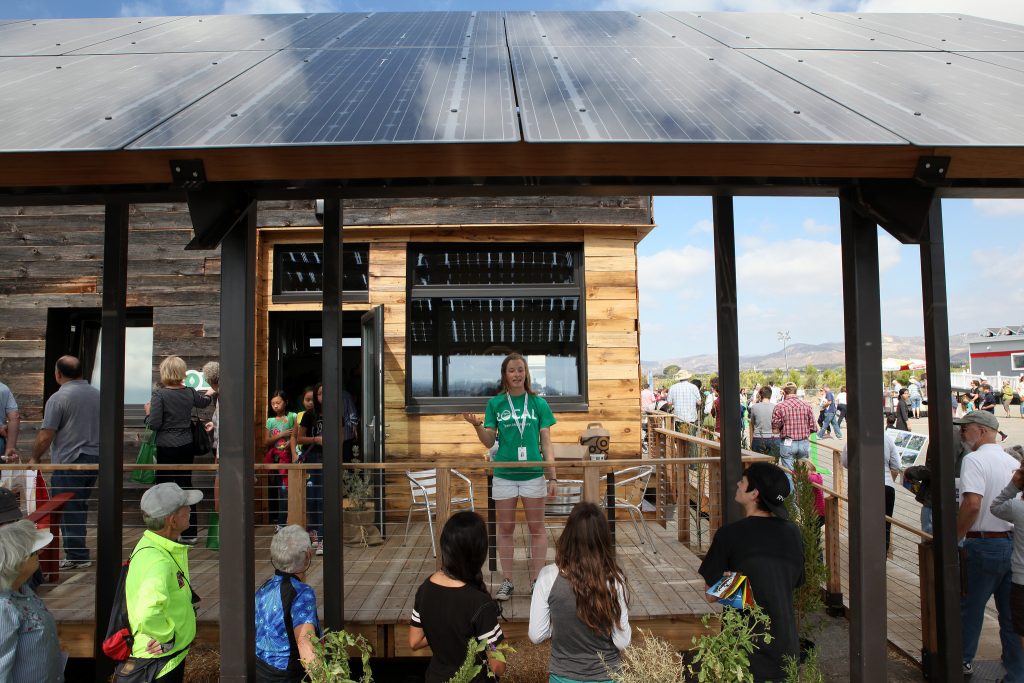 Cities are taking a major leadership position on climate via their actions on local energy. They’re also managing energy demand and powering up wind, solar, geothermal, and biomass for a plethora of other reasons too: economic development, job creation, environmental quality, energy security, and safety. What’s more, there’s a movement afoot in leading cities for 100% renewable energy and energy efficiency, a movement that you can play a role in.

Urban environments house the majority of the world’s population, some four billion people, and will welcome 2.5 billion newcomers by 2050. Already, eight out of ten North Americans live there and soon that number will be nine out of ten. Cities account for 70% of the world’s carbon footprint and hold many of the influencing levers on emissions: urban design, transportation, heating/cooling, and electricity generation. As ambitious as some of them are on emissions reduction goals—Tokyo, 25% by 2020, Chicago and Hamburg, 80% by 2050—increasingly, cities are staking out control and targets on renewable energy (RE).

A number of influential global cities have already committed to some form of 100% renewable energy by at least 2020. They include: San Francisco, Sydney, Copenhagen, Fukushima and Munich, to name a few. The list of cities committed to near 100% RE is long, as is the roster of small cities that have implemented 100% RE, such as Greensburg, Kansas or Samso, Denmark.

Setting an ambitious target—and being able to work backwards from it, allows city and energy planners to put the right pieces of the puzzle in place to achieve something powerful.

It’s clear that paralyzed national and international climate action is now giving way to the acceleration of urban upstarts, but has the era of the urban renewables arrived? With 100% RE cities like Copenhagen and San Francisco creating the model, the answer is that the sun is rising on Renewable Cities.

Every burgeoning movement needs a gathering place, a platform to define itself, share knowledge, and build capacity. For cities wanting to take advantage of the benefits of clean local energy, energy efficiency, and integrated design, that place is Renewable Cities, a new global 5-year program of the Simon Fraser University Centre for Dialogue in Vancouver, BC. The Global 100% RE campaign is a supporter of this program, working closely to make 100% RE the new normal.

Renewable Cities builds on the existing leadership and supports cities through the transition to energy efficiency and renewable energy by providing the convening capacity, networks, and meeting space. It has been co-designed by thought leaders working in municipalities and government, the private sector, utilities, and civil society.

As a first step, a Global Learning Forum, held in Vancouver, BC from 13-15 May, 2015, will convene leaders in a solutions-focused dialogue. Here, implementers, innovators, and leaders will network and learn through small group capacity building sessions. They include: city staff, such as managers and planners; individuals from the private sector working on energy and efficiency; policy-makers and elected officials; and, representatives from civil society, the research community, and other levels of government.

The aim of the Global Learning Forum is to mobilize knowledge from leading jurisdictions and enhance the ability of cities and utilities to implement energy efficiency and renewable energy in their electricity, heating & cooling, and transportation sectors. Three types of capacity building sessions—knowledge mobilization, peer to peer learning, and intent to action­—are being developed across four streams:

In these sessions, participants will have an opportunity to learn from implementers and key innovators who have made strides in advancing energy efficiency and urban renewables in their jurisdictions. They’ll have a better understanding of the ingredients—legislation, political will, finance, and technology—that form the basis for action in cities.

In addition to the capacity building sessions, an opening evening will set the stage for a cultural shift and inspirational panels throughout the three day Global Learning Forum will highlight the progress and potential for urban renewables and energy efficiency. Optional site visits will give participants the opportunity to take in cleantech innovators, renewable energy projects, and Vancouver’s breathtaking vistas. The Forum takes place at the Four Seasons Hotel in downtown Vancouver, where a special rate has been negotiated for Renewable Cities guests.

If you’re interested in learning more, visit the Renewable Cities website and sign up for program updates or register to take part in the Global Learning Forum. Join the movement.