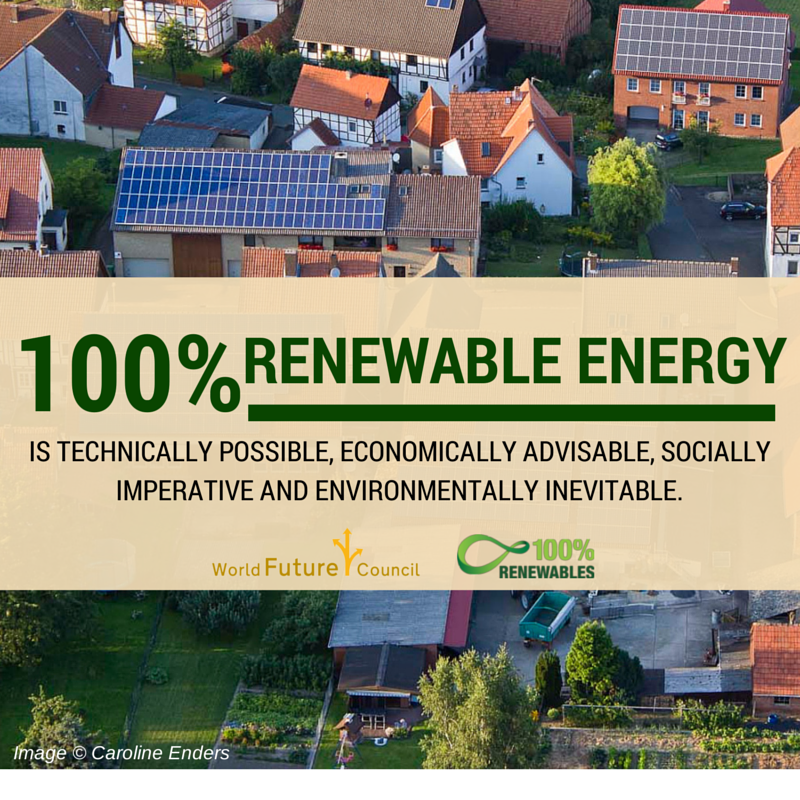 Many people who consider themselves supporters of renewables still doubt the feasibility of 100 percent in the near future. What these people often overlook is that 100 percent Renewable Energy (RE) is already reality today. Here are some facts that might inspire some re-thinking about our energy future….

It is not small communties that are striving toward 100% RE: Globally, there are several countries that are moving towards or have already achieved 100% RE. Denmark, for example, is the first OECD country that has committed to achieving 100% renewable energy in electricity and heat by 2030 and to be totally fossil-free by 2050 including the transport sector. Further, Scotland established a target to supply 100 % of Scotland’s electricity demand to be supplied from renewable sources by 2020.

But the goal of achieving 100% RE is not only for wealthy or industrialised countries – it is taking root in countries and jurisdictions in all corners of the globe, including in Cape Verde, Africa as well as Latin America where Costa Rica is one of the leading nations.

Renewable energy technologies have proven scale. Big cities around the world have set a 100% RE target and are well on its way to achieve it. To give just some examples that are worth to explore: the German cities Frankfurt and Munich, Sydney in Australia and San Francisco in the US. Each of them is pursuing an individual strategy, incl. citizen involvement, top-down policy incentives cooperation with neighbouring communities. You can find a detailed analysis of them also in this Policy Handbook.

Communities around the world are proving that 100% Renewable Energy is technically possible, economically advisable, socially imperative and environmentally inevitable.

In Germany for example, a network of 140 100% RE regions includes 74 regions and municipalities that have already reached 100% renewable energy targets.

One of them is Rhein-Hunsrück District. As of early 2012, the District of Rhein-Hunsrück with about 100.000 inhabitants officially began producing more than 100% of its electricity needs, crossing an important milestone on the way to creating a truly 100% renewable energy system. In early 2014, it is estimated that Rhein-Hunsrück already produced over 230% of its total electricity needs, exporting the surplus to the regional and national grid, or re-directing it into local transportation, hydrogen or methane production. Through improvements in energy efficiency and the extension of renewable energy, the district has converted energy import costs into regional jobs and added value. Within 15 years, Rhein-Hunsrück District`s CO2 emissions were reduced by 9.500 tons, the cost savings amount to € 2 million. You can find a detailed analysis of the districts success story in this Policy Handbook.

A true pioneer in a country that relies 90% on coal to produce electricity is the little town of Kisielice in northern Poland – an extraordinary example of local energy transformation. By September 2014 the town achieved the 100% renewable electricity target.

Perpignan Méditerranée in France is another example. The region in the nuclear dominated country is intending to become a true role model in the energy transition, aiming to be the first urban territory in Europe to meet all its electricity needs by means of local projects. 75% of the region’s electricity needs are already met by renewable energy. The approach is to reinvigorate the local economy, agriculture and tourism.

100 of the world`s leading businesses including, IKEA, Swiss Re, BT, Formula E, H&M, KPN, Mars, Nestlé, Philips, Reed Elsevier, J. Safra Sarasin and Yoox commit to use 100% renewable power by 2020. Find out more about it here.

Islands around the world have managed to reduce their consumption of expensive and volatile fossil energy sources by substituting them with local renewable energy resources. This represents direct cost savings for governments, utilities and ultimately for citizens, as many renewable energy technologies are now cheaper than imported fossil resources. The benefit of lower energy prices and enhance access to sustainable energy is specifically true for island-states and isolated/ off-grid areas. Some great examples that we can learn from are the Spanish Island El Hierro, the African island-state Cape Verde as well as Tuvalu and Tokelau in the South Pacific and the Indonesian island Sumba.

Further recommendable readings are the work from IRENA on Pacific Lighthouses and the WFC Policy Handbook.

100% RE provide a plethora of development benefits that have a high priority among governments across the world. Bangladesh is one example of how a 100% renewable energy strategy can be a cost-effective solution to meet energy needs regardless of economic strength or GDP. The Government has established a goal of increasing electricity access in rural Bangladesh to 100%. This goal is being implemented almost exclusively with the use of solar home systems (SHS) due to economic advantages. It is also solar that provide electricity to 2,400 people in the Indian village Dharnai.

Since almost 3 billion people suffer from both, erratic or no access to electricity and reliance on inefficient and polluting solid biomass fuels for cooking, 100% reliable, affordable and efficiently used renewables are the only options for a more decent livelihood of the poor.

100% Renewable Energy is possible for the entire energy system. Whereas still many of the 100% RE strategies have a strong focus on the electricity sector, examples prove that it is a matter of political effort to accelerate the use of renewable energy in the heating and transportation sectors. The Danes just do it! The Nordic country put the brakes on heating costs by transitioning to renewables. The same is true for many regions in Germany including Hamburg and Frankfurt. Costa Rica is an example for how a holistic 100% RE policy can reduce emission in the transport sector.

Pioneering governments that are well on its way to achieve 100% RE have implemented an inclusive policy frameworks that allow new business models to emerge and a high level of citizen engagement. By providing market access to a wide range of stakeholders, the 100% RE strategy transformed consumers to producers and unlocked private investments. Denmark shows how wind energy co-ops (em)power local communities and citizens across Germany, Italy, France or the Czech Republic inspired change and profit from the new energy model.